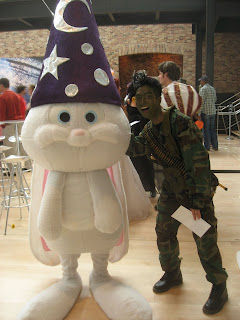 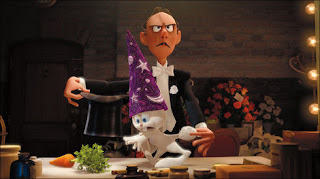 Best. Costume. Ever.
top: Sonoko Konishi as Alec the Bunny, Mach Kobayashi as the G.I.
bottom: still of Alec from Presto, a Pixar animated short by Doug Sweetland

below: commandos stormed the Pixar costume contest stage this year in an effort to save John Lasseter from a sniper. Unfortunately, they were picked off one after another by said assassin. It was up to John to pry a rocket launcher from the cold, dead hands of one of the commandos and destroy the sniper himself. Below are the brave soldiers lost under enemy fire.
from left; me, Dovi Anderson, Emma Coats, and Mach "The Pitbull" Kobayashi. 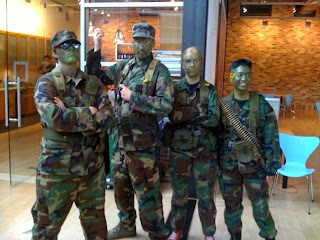 Happy Halloween, everybody! Make sure to scare the crap out of all of your friends. Also, a little reminder for everyone to get out there and vote! As the clown prince of crime himself once said, "Think about the future!"
Speaking of politics, here's my version of Gotham's tragic district attorney. As a fan of the original Burton films, I was always disappointed that we didn't get to see Billy Dee Williams' take on Two-Face. In The Empire Strikes Back, he shows a great capacity for portraying the key attributes of the character: ambition, confliction, and charm. 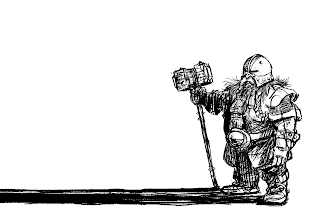 You put one troll up on your blog and the next day, the dwarves show up--belligerent little sods. This particular ruffian is Bofo of Bolduum, elf-crusher and forger of sharp things.

Continuing my mythological-tangent, this is Ulla, a valkyrie, and her theme song. Ecstacy of Gold was fantastic in The Good the Bad, and the Ugly, but I always thought it sounded more like an ancient call-to-arms than a western show down.

Snapple fact: Valkyries fly over combat, escorting fallen warriors to Val Halla. These battle maidens are often depicted as riding winged horses, but according to Wikipedia (or as I call it, Brain Number Two), 'norse horse' was an Icelandic term for a wolf. So these babes soar over battles on giant friggin wolves, clad in shimmering armor, bringing glory to the fallen. That's pretty epic.
Posted by Unknown at 8:15 PM 2 comments:

Chades Challenge XVIII: Hostile Troll
My troll is s sea-side cliff-dweller that rides a mutated coconut crab. That's pretty hostile. The drawing lacks clarity due to the dense line mileage and lack of color or tone. Anyone want to do a color pass on this baby? I'll post all of the applicants!
I could do another week of these! Anyone else got any?

Thrain, a viking jarl
Posted by Unknown at 8:56 PM 4 comments: 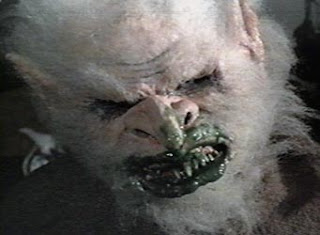 Chades Challenge XVIII: HOSTILE TROLLS
I think Nate and I were both thinking Halloweeny with our noun and adjective. Should be fun! Let's see who can draw the most malevolent, mindless, slobbering, hostile troll imaginable. Sketch greatly!
Posted by Unknown at 4:02 PM 2 comments:

Monster Mash Part II
Too lazy to draw a body? Draw a cloak!
Posted by Unknown at 10:23 PM 3 comments: 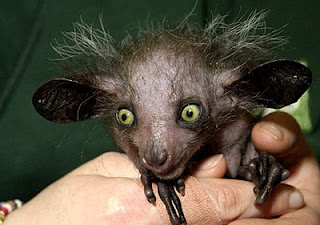 Monster Mash Part I
It's always fun to draw monsters, but Halloween sets the atmosphere particularly well. Looking for vampire reference, I stumbled upon this eerie little fellow. The critter's an aye aye,the world's largest nocturnal primate (unless, of course, you count the animator). I think the real thing's still more caricatured than my design!
Posted by Unknown at 9:55 PM 5 comments: