MERRY CHRISTMAS
from the Austin Translation! 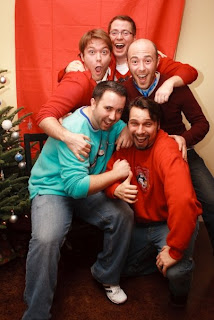 2008 has definitely been a year of ups and downs. I had the privilege of working alongside some of the most innovative and brilliant artistic minds on the planet and being a part of one of my favorite films of the year, Wall-E. I also lost one of my best friends, Justin Wright, to whom the film was dedicated. Justin would definitely be stoked to see how many people loved his story work on both Wall-E and Presto, and to see that justice had finally been done to one of his favorite superheroes, Ironman. So this year, as I join friends and family to celebrate the birth of Jesus, I'm particularly mindful of all amazing people God's brought into my life, including all of you who check this blog for the most recent dinosaur news or Chades Challenges. Whatever holiday you celebrate this season, I wish you a ridiculous amount of joy and merry-making, and more pie and chocolate than you can shake a stick at! Merry Christmas, and Happy New Year, see you in '09!
"There has been only one Christmas - the rest are anniversaries."
~W.J. Cameron

My apocryphal rock band, Sly Orange, went on tour through Portland and Seattle last Independence Day. Our hotel-thrashing drummer, Vi, started compiling the video that we shot for our bass-player, Ben, who unfortunately couldn't make the tour. Most of the conversations are out of context, and make little sense. You'll hear me talking about 'future surgeries' which is me talking to the camera as if it is my future-self watching the video like a time capsule. I'm not sure if that makes more or less sense. Anyway, Vi did a great job editing this little teaser, and it features my fantastic singing voice, so I thought I'd share it. Make sure to look for The O-dyssey in record stores and on iTunes this Christmas! 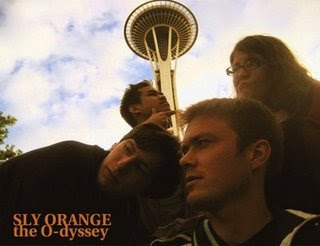 In other music news, President-Elect Obama has officially tapped John Williams to compose/conduct a piece of music for his inauguration. Talk about getting started on the right foot, I can't think of a better person to set the stage for a historical moment. I think there's only one piece suitable for such an occasion. It certainly wouldn't be the first Star Wars/Obama mash-up. 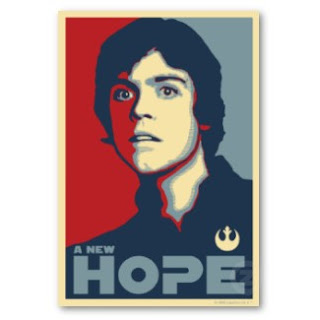 Everyone loves John Williams, but a much more polarizing figure appearing at the inauguration is Pastor Rick Warren. I've read his book, A Purpose Driven Life, twice, once with my late buddy, Justin Wright. Justin and I hardly agreed with each other on every issue, and we certainly didn't agree with everything Pastor Warren had to say in his book, but it definitely challenged us both to think about what it means to live a life of purpose. Before anyone gets angry about Pastor Warren giving the invocation at Obama's inauguration, I'd challenge them to watch his talk at the TED conference. You may not agree with everything the man has to say (if you don't, you may find Dan Dennett's TED talk more to your liking), but Pastor Warren's certainly not a "fear mongerer," and I'm personally not interested in hearing an invocation from anyone who agrees with everybody, anyway.

"Humility is not thinking less of yourself, it's thinking of yourself less."
--Rick Warren
Posted by Unknown at 8:23 PM 2 comments: 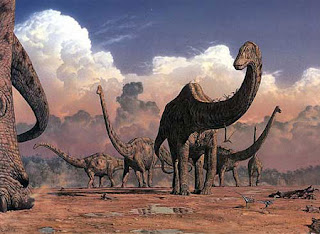 According to Science Daily, two new species of prehistoric animals were found in the Sahara this week, a pterosaur and a sauropod (the long-necked dinosaurs). Scientists believe that the Sahara used to be an expansive grassland dotted with lakes and ponds like a prehistoric Shire. Perfect stomping grounds for a sauropod (and sauropods did an awful lot of stomping).
This marks the most exciting find to come out of Africa in nearly fifty years and some great news for us sauropod fans. Finding a new dinosaur on a dig is quite a feat, finding two entirely new species is astounding! 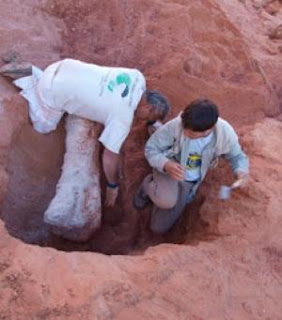 Nizar Ibrahim (pictured above), the palaeontologist leading the study, will spend the next six months examining all of the fossils and writing about them for his thesis. I thought we were lucky at CalArts to be able to make films for our thesis, but studying new dinosaur species to earn your PhD might be even cooler.
Thanks to by brother, Andy, and Michelle for sending me the article!
In other, even more exciting news, scientists at Penn State lead by Webb Miller and Stephan C. Schuster have made a genetic break-through mapping the first genome of a prehistoric animal--the woolly mammoth! Schuster says, "Our dataset is 100 times more extensive than any other published dataset for an extinct species, demonstrating that ancient DNA studies can be brought up to the same level as modern genome projects." 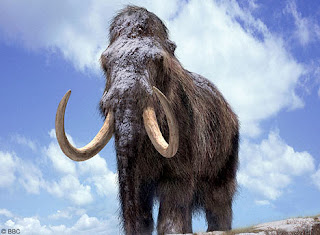 A lot of people may question whether or not we should be playing God, and we've certainly seen the effects of eating from the Tree of Knowledge, but who doesn't want to ride a woolly mammoth? Read more about the break-through in the article here. What do you guys think? Should we bring back prehistoric animals or leave 'em alone?
Posted by Unknown at 9:30 AM 2 comments: 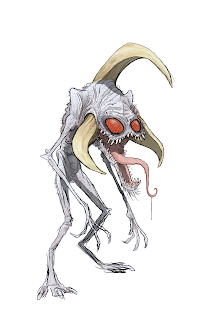 Spawn fan-art
It's no secret that my favorite superhero is Batman. But in junior high, when my career goals were somewhere between ILM and Image comics, my favorite was definitely Spawn. Todd McFarlane was my first artistic hero, aside from my dad and brother, and McFarlane's version of Spiderman is still my favorite. So it's about time that I put up some fan art. Violator is right up there with Joker and Venom as one of my favorite comic villains. Like Joker, he's got a morbid sense of humor, which makes him fun to read, and like Venom he's got the physical menace to back it up, which makes him fun to draw!

addendum 12.15.08
I just found a website with a gallery of all the Spawn covers. I remember seeing this one, in particular, on the shelf. How awesome is that drawing? There's just something about a hero from Hell who refuses to serve his master that's intrinsically badass. Why can't they make a good movie out of this? Mr. McFarlane, if you're reading this, give me a call! I will help you make this film! 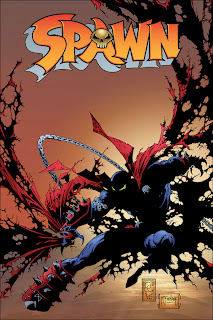 Speaking of comics that would make great movies and amazing covers, this is probably the greatest comic cover (and series) of all-time. Someone needs to get Spielberg and Williams on this. I mean honestly, would you rather see Tintin or Superman destroying congress?? 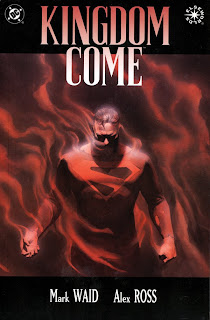 The people have spoken! From the very limited selection of 'best pets ever' you guys have chosen Tyrannosaurus Rex. A wise decision. Don't get me wrong, ewoks are great, but I know who I'd rather have protecting my yard from burglars.

In other AustinTranslation news, Chades Challenge XIX is cough-up. As in, the substance that comes up when you cough. This is the first Chades Challenge that doesn't follow the adjective/noun guidelines, but it should make an interesting challenge. Reminder, this is a character design challenge. Cough-up as a sympathetic character...is it possible? As one Alaskan governor I know always says, "You betcha!"
Posted by Unknown at 9:04 PM 3 comments: 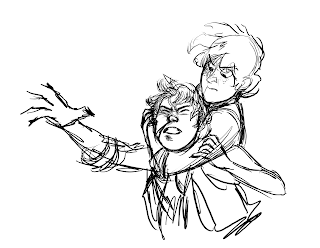 Alright, Stephan, I'll cough up some background...
These are characters from a pirate-era RPG that my friend Everett Downing is gearing up. Finn and Sean Berry (played by Emma Coats and myself, respectively) are teenage brothers from a large Irish-Catholic family who joined the legendary Lt. Robert Maynard in his quest to hunt down the pirate baron Blackbeard. Finn (the red-head) is a hot-headed scrapper, and Sean (who I assume is the older of the two) is a more dignified, voice-of-reason sort of fellow. The two are a lot like Sansa and Arya, for those of you who follow George R.R. Martin's A Song of Ice and Fire series (soon to be an HBO series--woo hoo!); two siblings who couldn't be any different, come close to hatred at times, yet act as a pretty powerful team.
RPGs can be a great exercise in character development and collaborative story-telling. I highly recommend them to any artists, writers, or filmmakers out there. Below are character studies drawn by the glorious Emma Coats. 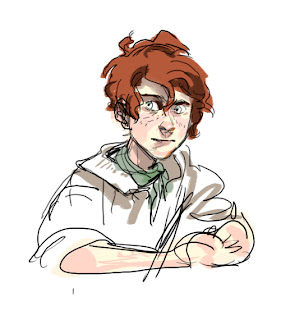 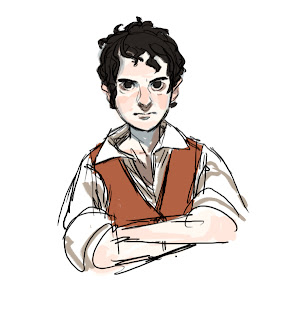