TALES FROM LONDON:
Chapter III: The Nose
Another story started with a sentence from Vi: "Shirley's nose was growing all the time." Nine syllables? Sounds like the start of a limerick to me.
Shirley's nose was growing all the time,
Her need for kleenex caused a life of crime.
The grocers she'd rob,
Would chase her and sob,
"That tissue's no match for your slime!"
Posted by Unknown at 3:03 PM No comments:

TALES FROM LONDON
Chapter II: The Eye
This story was written on the London Eye, a massive Ferris Wheel that seats over a dozen people per cart and hoists passengers over 440 feet into the air over London. Vi gave me the opening title, ''James Gurney felt sick.'' And I took off from there. Enjoy.
James Gurney felt sick. The world-renowned author and artist had always been bothered by heights and, standing with his forehead resting against the cool glass pane of his compartment on the London Eye, looking over a hundred meters down to the River Thames below, he was definitely feeling bothered. And yet, the terrible distance to the water below was hardly the source of the knot in his stomach.
He had come up to relax, get a view of the city, and perhaps do a bit of drawing, but the scene unfolding on the river beneath him was nothing short of horrifying. The cries of the people scrambling across the deck of the ferry could scarcely be heard from inside the ferris wheel's enclosed capsule, but the artist's eye could pick out the flailing arms and manic gestures that were characteristic of a crowd in panic. One woman, who looked quite like a silver and lavender ant, had swung a leg over the side railing, thought better of it, and was now straddling the side of the ferry, unsure of whether to stay on the ill-fated vessel, or take her chances in the grey waters below. And yet, as terrified as the people seemed to be, James could hardly say that their plight was the source of his nausea, either.
What would have spun any man's stomach was the massive, leathery black creature that had thrust itself onto the ship's deck. Most laymen would describe the crane-necked leviathon as the creature from the Lock Ness. In fact, one towheaded boy of nine was pounding on the glass beside James crying, ''Nessy! Nessy! Look, mum, it's Nessy!''
But James was no layman. He was an artist, one who specialized in prehistoric art, as a matter of fact. He was quite well-read on all things dinosaur-related and had been commissioned several times by National Geographic and the Smithsonian. To him, this was no monster attacking innocent people, it was a wondrous creature of a bygone era defending itself against the modern age.
And yet, the sight of the seemingly impossible creature didn't bother James either. What really made James feel sick was his pocket. His empty, empty pocket. The pocket where his sketchpad and pen should have been. Of all of the days for a real, living dinosaur to show up, THIS was the one day James had no way to draw it.
James gave a sigh, fogging the glass, and the creature disappeared completely.
Posted by Unknown at 8:21 AM 4 comments:

TALES FROM LONDON
Chapter I: The Trenches

Like I said in my last post, I'm tromping through London this week. The friends I'm with (Vi and Amalia) are fellow writers and filmmakers. We took a screenwriting course together at CalArts, and ever since, we've held eachother accountable to continue writing. So, on this vacation, I've made it a goal to write a short story every day, based on my experiences of the day. Today, we visited the Imperial War Museum. This story is based on the "in the trenches" exhibit, which simulated what life might have been like in the trenches of World War II.

Pender felt cold wetness seep into his britches and onto the back of his legs. The night air bit at his eyes and ears, but his sweat-stained scarf kept his nose and cheeks warm. He wasn't sure what was worse--the smell of the breath collected against his scarf (Pender couldn't remember the last time he brushed his teeth), or the stench of the urine and war that permeated the trench around him.

Pender was his nation's man, and their last hope, he reminded himself. This was no time to rest, the men were looking to him. Using one hand against the stack of munitions, he rose to his feet. His knees ached from crouching, it felt like the sting of cowardice infecting his joints.

The chill winter air was silent. Only moments ago, it was filled with the sounds of war, of rounds whizzing inches overhead. Miller had been hit. A shot to the left cheek. The red had spread across his cheek almost immediately, a stark violent contrast to the snow he writhed on top of.

is screams had long-since died away. He had gone home He was with his mother again. They would all be reunited with their loved ones soon enough.

Pender stood, but crouched, his head just under the battlements. He surveyed his weary warriors. Tully ("Bully Tully") was glowering up at the steel grey sky though the softly falling flakes of snow. Campbell was anxiously cracking his knuckles, though the sound was muffled by dyed-wool mittens. And Monroe...his trusted leftenant...whose eyes glistened with unfallen tears, looked up at Pender. It was a bitter glare, full of fear, anger, and accusation.

A shout broke the stillness. A shout from the enemy lines.

Pender locked eyes with Monroe. A desperate, uncomfortable moment passed. Blood-numbingly cold as it was, Pender has to whipe the sweat from his brow.

Campbell shook his head and whispered with a voice thick with tears, "We ain't ever surrendered yet, mate. We can't give in now!"

Pender looked to Monroe, "What do you say?"

At once, the resentment melted away and his old friend looked back at him, "They fight like girls anyway."

Pender smiled and thrust his hand into the wall of snow that formed the trench. He pulled out a wad of snow and used both hands to pack it hard. With his snowball complete, he looked to his men. Each had their arms full, cradling frosty ammunition. He smiled and cried, "Kill the girls!!"

"Kill the girls!!" joined Campbell and Bully Tully. And with that, the four eight year-olds ran out of their trench and charged across the fresh-fallen snow toward the girls' fort, hurling their snowballs into the crisp December air.
Posted by Unknown at 5:02 PM 1 comment: 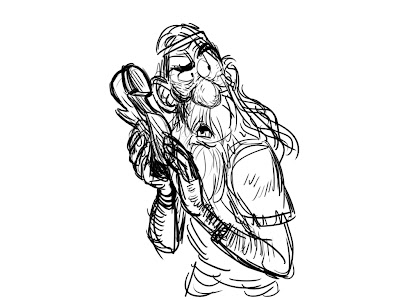 I live in Berkeley, CA where we have liberal agents in no short supply. I think the leather-skinned hippies who talk to their shoes are liberal secret agents. As always, if you have a contribution to the character design (or chades) challenge, let me know and I'll post your drawing below. It may take me a while, though, I'll be spending next week in bloody London.

If you don't feel like drawing filthy liberals, join us in two fridays with...

March of the Penguins
I issued the challenge of redesigning the world's foulest fowl to a couple friends. Here's what they came up with:
Vi-Dieu Nguyen 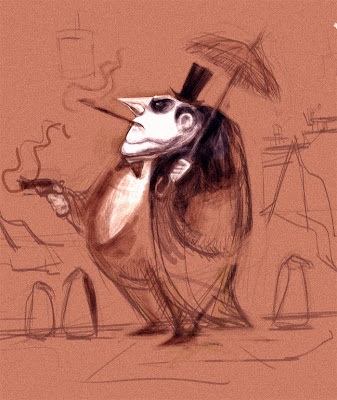 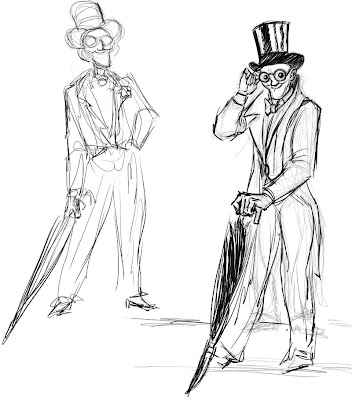 And another of mine 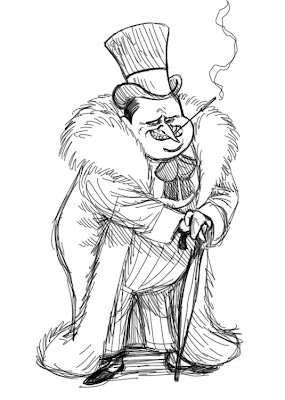 Speaking of the Penguin, here's something I believe Batman's nemesis would endorse: camera mounted killing machines:

And something that might enfuriate Mr. Cobblepot: the Rôti Sans Pareil, or Roast without Equal. This is an actual dish designed by French gastronomist, Grimod de la Reynière, in the 19th century. Better start cooking now if you want to serve one for Thanksgiving. 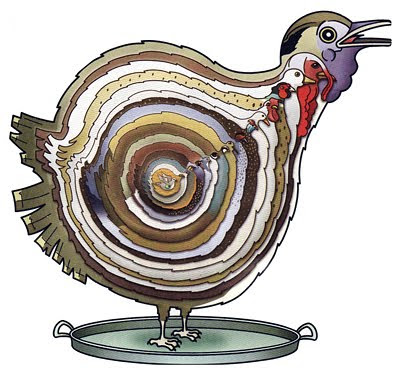 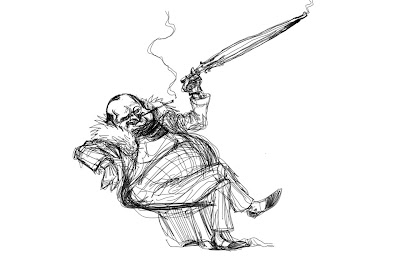 The Penguin is probably DC's most under-rated character. Whenever I see him in a comic, he's almost treated with disdain by the artist, as if they can't wait to finish the drawing and move on to the next character. It's too bad they don't see the potential that Burgess Meredith and Danny DeVito did. What other villain could stand up to the dark knight in a debate? 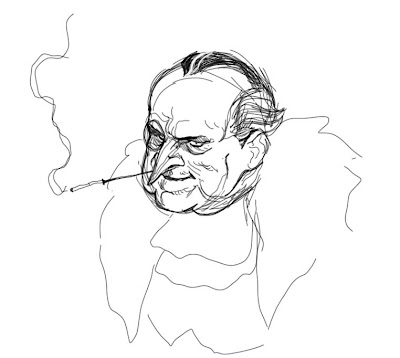 I see him as a gentlemen monster. Someone who might walk off the Titanic, but would also be at home on the iceberg.
Posted by Unknown at 12:46 PM 1 comment: 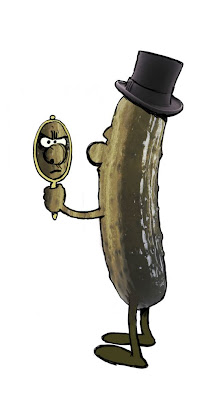 I'm posting this one a bit early because I'll be on a plane all day tomorrow, flying home from Costa Rica. Which makes this my first international chades submission! Now I'm disappointed in myself for not creating a pickle with a more Costa Rican (or "Tico") vibe; this guy obviously shops at the same habberdashery as Mr. Peanut. If you designed your own stand-offish pickle, let me know, and I'll post it below. Otherwise, as always, you're invited to contribute to the next challenge, due September 24th: 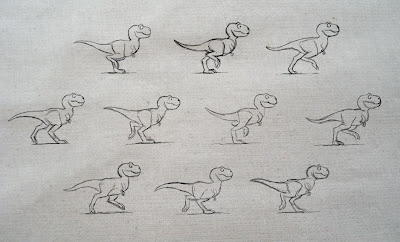 The Oakland Airport is putting together a Pixar exhibit in October and a few of us animators were invited to contribute strips of animation for the zoetrope display. We were given the option to draw original characters instead of sticking with the Pixar catalogue, so I did this baby rex walk cycle.
Posted by Unknown at 2:59 PM 2 comments: 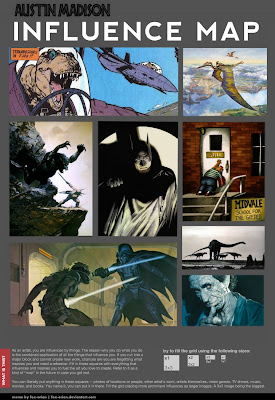 This is a great concept created by Fox Orian. My influences (clockwise from upper left):