A contribution to Everett Downing's 365 Supers. 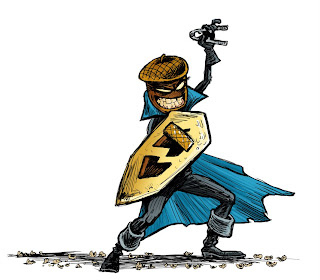 Bitten by a genetically-enhanced acorn, Francois Noyer took on all the abilities of a nut (most notably a tough outer-shell and causing severe irritation to those with nut allergies). He has since vowed vengeance on all nuts, seeds, and legumes. Noyer (now called The Nutcracker) won't stop until he brings justice to the mutated acorn that made him into the nut he is today.
Arch-enemy of Squirrel Girl.

The Boy Who Cried, "Nessy!" 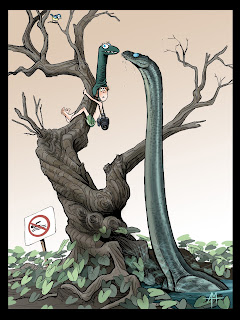 This is my contribution to a promotional book for TR!CKSTER, a brand-spanking new convention for comic creators. TR!CKSTER is the brainchild of Pixar story artists Ted Mathot and Scott Morse. What SDCC is for fans who want to get a sneak-peak at the latest block-busting summer tentpole, TR!CKSTER will be for artists, filmmakers, and comic creators who are more interested in learning how to get their own original work published/distributed.

Scott and Ted's assignment for the promotional book was to illustrate your own version of the archetypal trickster character. My thoughts immediately turned to the boy who cried wolf, but Plesiosaurs are so much more fun to draw than wolves...


To complete the day's dinosaurian schenanigans, we had a screening of Jurassic Park at work tonight. As you can see below, it was a B.Y.O.D. (bring your own dinosaur) event. 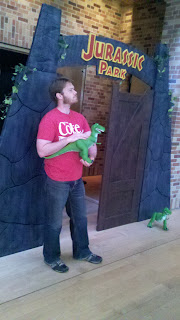 The gate was made by my buddy Sean Feeley for his jeep to come crashing through during the Red Bull Soap Box Derby. Sean's team is defending the championship title they won last year with their Brutal Legend van.

Good luck, Sean! Remember, objects in mirror are closer than they appear.
11 days...
Posted by Unknown at 12:47 PM 20 comments: 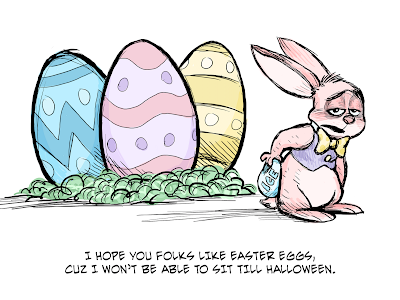 Happy Easter, readers! Take a moment this weekend, and reflect on the trials and tribulations the Easter Bunny goes through to lay eggs for children all over the world.

Only after I finished my design, did I learn from Reese Witherspoon on Conan about angora rabbits. Had I known about these furballs, I definitely would have chosen to design them.
If you designed any Easter Bunnies (everyone is invited to contribute), leave me a comment with a link to your image and I'll post it below. If not, join us in two weeks (May 8) for:
CHADES CHALLENGE XLIX:
THE MIGHTY THOR
Kevin "Fabergé" Danison 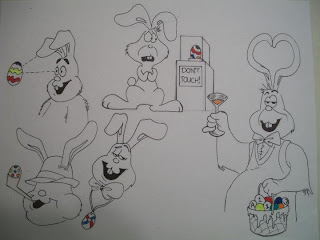 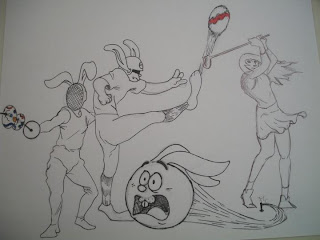 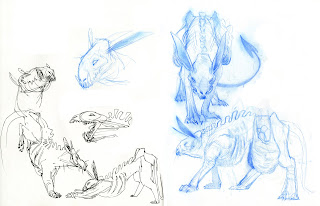 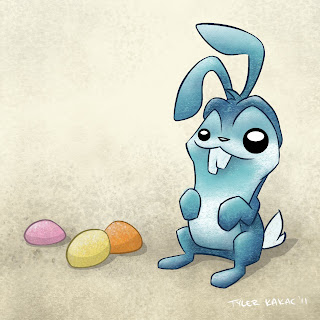 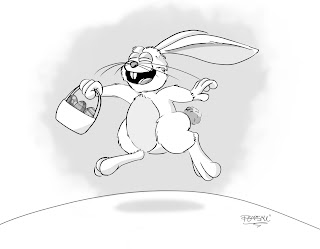 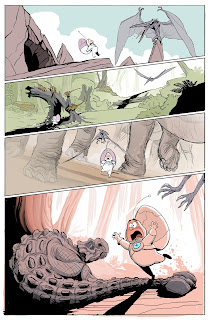 Featured in this week's page: Pteranodon, Deinonychus, Titanosaurus, Euoplocephalus
Available this Summer in paperback through Afterworks III and digitally through the Whamix app. Next Monday, page 6: "Rough and Tumble"
0 days...WINTER IS HERE! 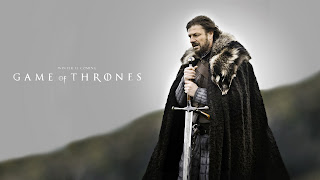 Game of Thrones premiered last night, and I couldn't have been more impressed. A solid adaptation with fantastic casting. My friend Jason hosted the premier party, and I represented the river gingers of House Tully. 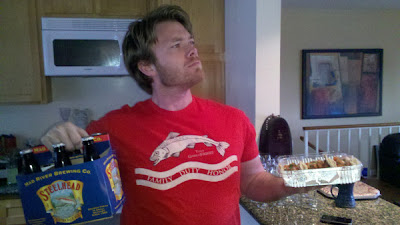 With a trout as your house sigil, you're kind of obligated to bring Steelhead and fish tacos to the party.

"A parliament is nothing less than a big meeting of more or less idle people." -Walter Bagehot


Sorry this post is late, I was on vacation last week. Turns out today is perfect timing,  though, what with the Rise of the Planet of the Apes trailer premiering yesterday. Bad title, cool trailer.
If you designed any evolutionary parliament designs (everyone is invited to contribute), leave me a comment with a link to your image and I'll post it below. If not, join us next week (April 22nd) for: 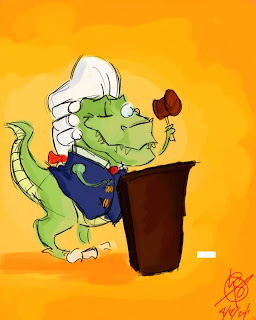 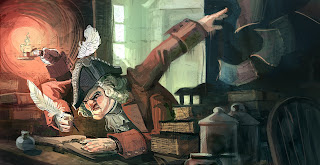 If you enjoy these Chades Callenges and would like a direct character design critique from me (or other far more talented industry professionals), check out my buddy Mario Furmanczyk's animation industry forum AnimatedBuzz.com.

Mario's been keeping this site up since we were at CalArts, and it's developed into an awesome Facebook/Animation Mentor hybrid. Get cheap critiques, post filmwork, portfolios, and reels, or just chew the fat with your fellow animators.
3 days...
Posted by Unknown at 2:13 AM No comments: 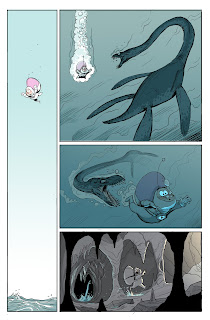 Featured in this week's page: Elasmosaurus
Available this Summer in paperback through Afterworks III and digitally through the Whamix app. Next Monday, page 5: "Jurassic Parkour"
I'm more excited than ever for Afterworks III to hit the shelves after this weekend's WonderCon. Let me tell you, it was a wretched hive of scum and villainy. And these are my kind of scum. 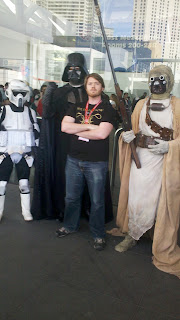 My dad and I had an Imperial entanglement after trying to bootleg some footage of Cowboys and Aliens, which rocked the audience's socks off. 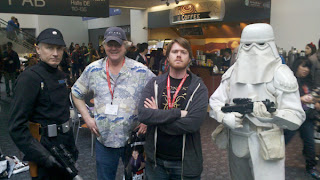 Thor fans or LARPers? Either way, these are my people! 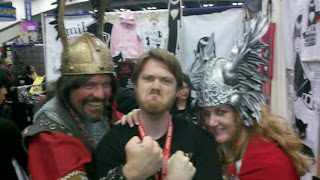 The highlight of the day was meeting Elvira. Maybe there's still time to get her t-bird a cameo in Cars 2 and have her come in to do the voice! 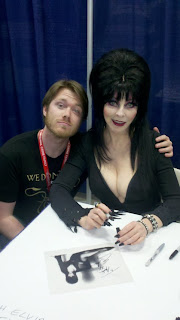 It's no secret that I am the real Batman. Need evidence? Here I am with the original Catwoman, Lee Meriwether. 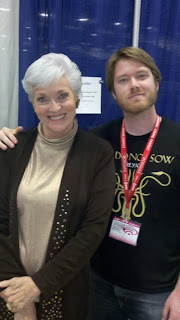 Lee as everyone's favorite cat-burglar. She looks purrr-fect, doesn't she? 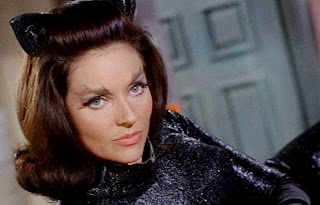 The hotness continued with girls of Femme Fatales. I have no idea what the show is about, but I'm already a fan. 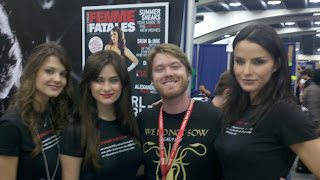 Some Pixarians enjoying a break from the nerdiness. 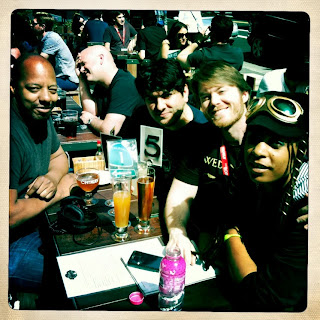 At the end of the day, I considered joining the League of Calamitous Intent. 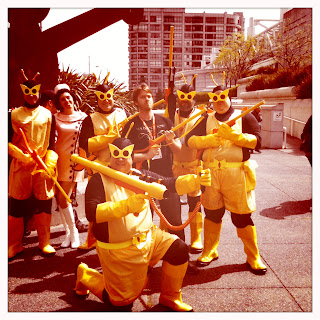 But why serve a Monarch, when you can rule as one? 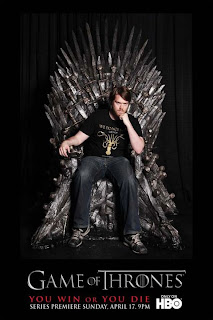