This Summer, I had a drawing bet going with fellow animators Scott Clark and Angus MacLane. The wager was which was going to be the better Marvel film: Captain America or Thor. The loser had to draw the winner's superhero defeating their own in an all-out brawl. 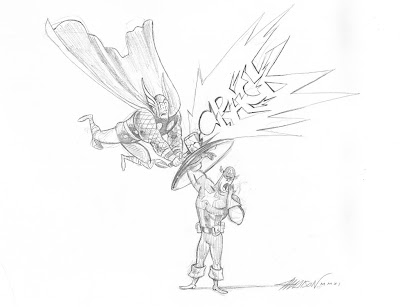 I liked both movies, and while I thought Thor was the better of the two, I can't ignore the objective Rotten Tomatoes and Metacritic scores. So here are my drawings for Angus and Sclark. 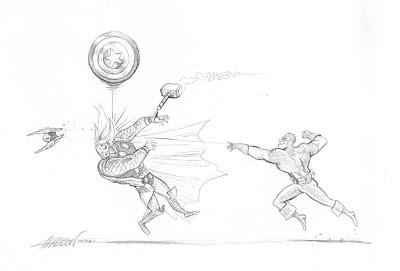 Rest assured, I'll be back next year for Batman vs. The Avengers!! 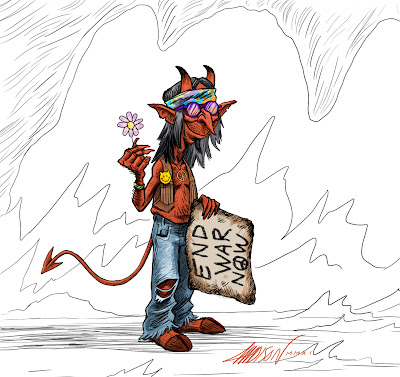 
If you have any hellish designs, let me know and I'll post them below! As always, everyone is invited to participate. If you don't have anything this week, you're welcome to contribute to our next Character Design Challenge on September 9th. The subject will be: 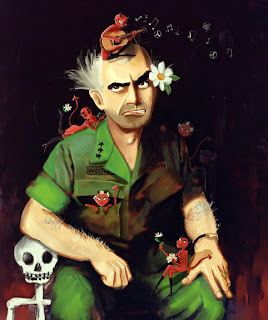 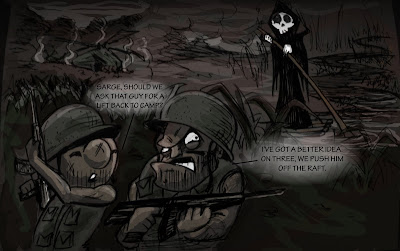 A couple late submissions for the last challenge, Marilyn Mantis. 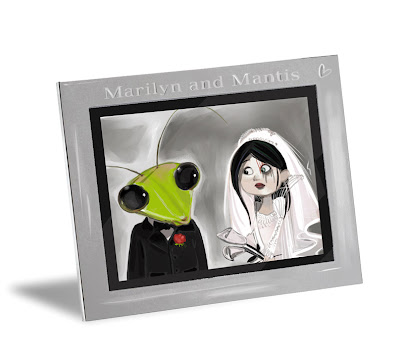 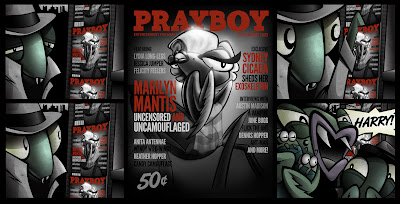 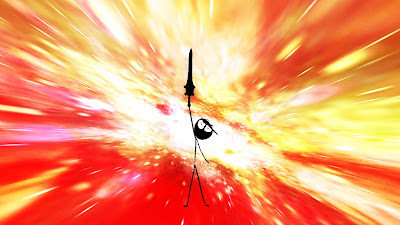 The Dick Figures Bath Rhymes music video is up, and my scene along with it, in all it's Jurassic Park/Masters of the Universe-ish glory.

Zack and Ed (the Dick Figures creators/voice actors) sent out this thank you to all the animators who participated in the Season Two finale. Can't wait for Season Three season premiere--when a certain Pixar animator may or may not be lending their vocal talents to Red and Blue's first villain... 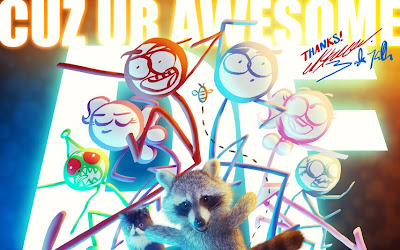 Pixar is Making a Dinosaur Film

Granted it's not the dinosaur film I pitched. I thought we could use a little synergy with internet/smart phone app culture. After all, dinosaurs are ancestors of all birds, especially the angry ones. 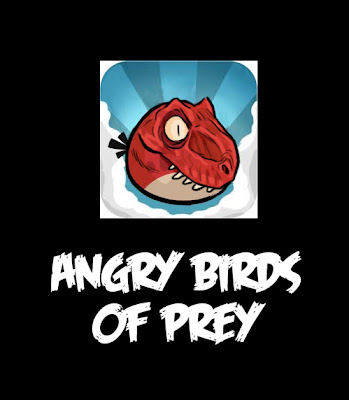 "Even the word 'raptor' means bird of prey."
"Doesn't look very scary to me. Looks more like a six-foot turkey."


People have been guessing this one for years, ever since some co-workers and I went on a dig with the Black Hills Institute back in aught nine. Ironically, the dig (which I chronicled in my Jurassic Journals) had nothing to do with this movie, but it got the rumor mill churning.
The official premise released today at D23 was, "What if that life-changing asteroid missed Earth? Director Bob Peterson’s hilarious tale depicts a world where dinosaurs never went extinct."
Stay tuned for more details from this adventure 65 million years in the making...
16 days...
Posted by Unknown at 12:43 PM 8 comments:

Remember music videos? Yeah, neither do I. But apparently they were once a method of promotion. My friend Zack Keller has resurrected this prehistoric medium for the next episode of his web series Dick Figures, and he's asked the interwebs for help in completing the task.

Everyone is invited to submit a shot, and the song mentions dinosaurs, so naturally I had to partake. If you're interested in contributing, check the Dick Figures music video website for guidelines. The deadline is tomorrow, so if you'd really like to participate, you'd best get on it!
The episode airs next Thursday, August 25th. Can't wait to see what everyone comes up with!

A couple of my favorite story artists had birthdays this month. Today is Emma Coats' birthday. She's an artistic gunslinger: quick at the draw and real good with horses. So good that I usually just bring my sketches to her when I need a horse filled in. 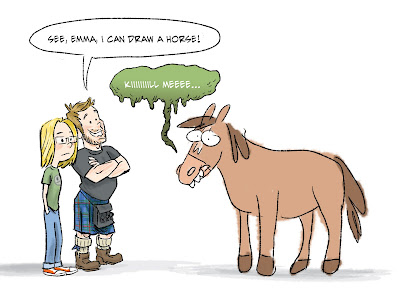 Last week was Valerie LaPointe's birthday. A cowgirl in her own right, Val did the scratch dialogue for Jessie in Toy Story 3. So she's got the whole actress-artist double threat going on.

She made a graphic novel called Mermaids in the Desert, and I can't think of a better way to describe Val! 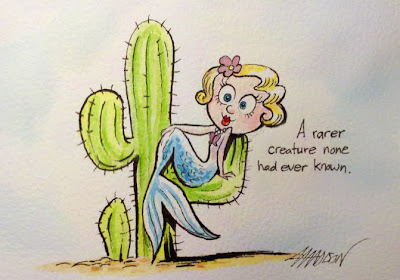 Happy birthday you little pilgrims, here's to many happy returns! 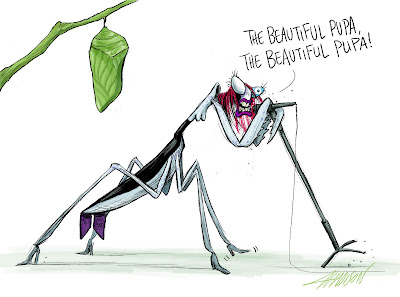 You and I both know that mantids, as hemimetabolic insects, have nymph stages rather than the holometabolic pupal stage. But don't let that bug you.
I had so much fun researching Mr. Manson, that I decided to do a sketch of him in human form as well. If you haven't watched this guy in a live show, you should check it out. Much like a mantis, I could picture this guy biting his mate's head off. 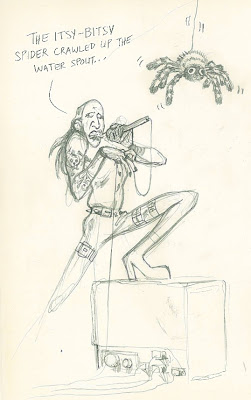 In retrospect, it looks a bit more like Anthony Kiedis.

If you have any Marilyn Mantis designs, let me know and I'll post them below! As always, everyone is invited to participate. If you don't have anything this week, you're welcome to contribute to our next Character Design Challenge on August 26th. The subject will be:
STYGIAN VIETNAM
Adam "The Praying Mantis" Dix 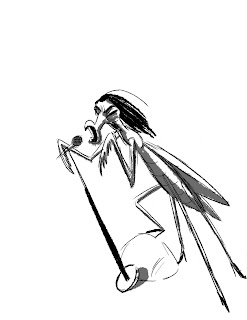 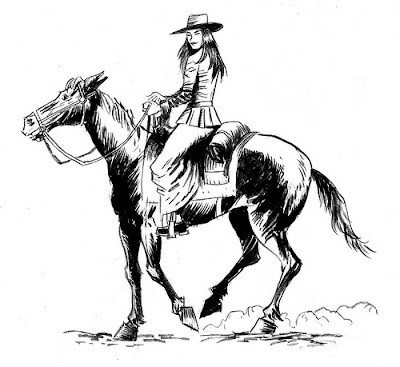 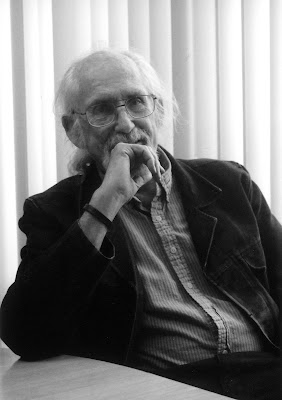 My favorite place on Earth is CalArts, and the embodiment of that creative institution is the animation department's long-time figure drawing instructor, Cornelius Cole III. Walt Disney may have founded and funded the school, but the culture there is much more of the free-spirited, rebellious, anti-Mouse nature that Corny encouraged. I shouldn't say Corny was anti-Mouse, I'm not sure he was anti-anything; he was just pro-individual and always cautioned his students against becoming a cog in a machine.

That is an especially daunting challenge nowadays when animators seem to be a dime a dozen. The animation industry is more competitive now than ever, and there is a huge pressure to fit into the studio system. To conform to the machine. True artists and craftsmen will always be rare, though, particularly sages like Corny. Pen Ward put it best when he said of Corny, "I hope to draw until my style develops into that awesome, awesome old wise man style."

Among the many loving tributes to Corny are these Producers Show intros from 2003 and 2005. Corny and his fellow figure drawing instructor, the late Mike Mitchell, made regular appearances in student films. Partly because of how much they inspired us, but mostly because it's fun to animate curmudgeons.

The best way to honor Corny is to get out there and make your own art. Direct a film, take a figure-drawing class, or just "learn to draw with your left hand gawdammit" as Corny would growl. I said earlier that the embodiment of CalArts is Corny, not was, because as long as his art endures (and as long as we, his students, pass on his lessons), he will live on.

According to Box Office Mojo, Transformers is the 10th film to reach the $1 billion mark (but just the second this week!). Not bad for a movie about a bunch of toys. 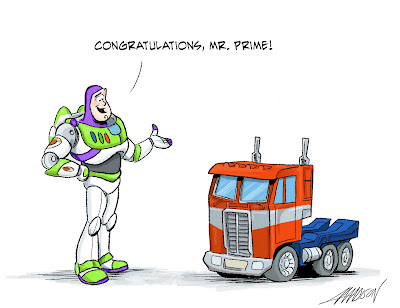 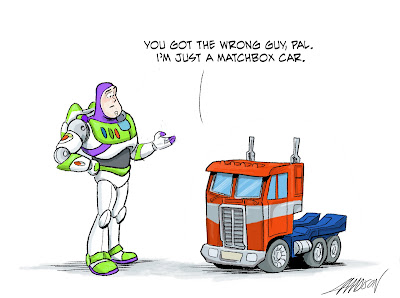 Congrats to the ILM team for all of their astounding work! Can you guys do that to my car?
33 days...
Posted by Unknown at 9:51 AM 1 comment: 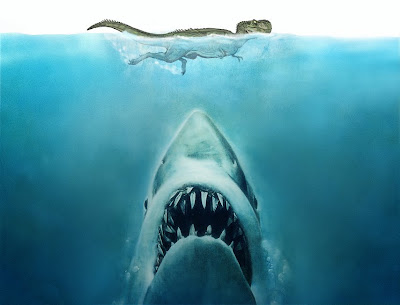 It's easy to forget that these animals once gave dinosaurs nightmares, too. Sharks have been around for over 400 million years, with the Great White family appearing 60-65 million years ago. That's exactly the same time as the extinction of the dinosaurs. Coincidence? I think not.
O days! Happy Shark Week!
Posted by Unknown at 8:27 AM 11 comments: