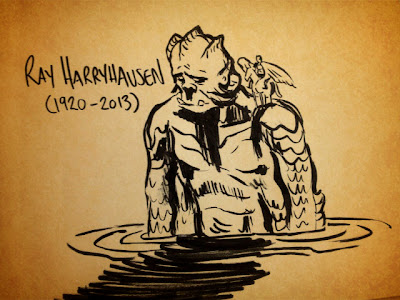 I met Mr. Harryhausen while I was a student at CalArts. At the end of his animation lecture, a student asked if there was a trick to animating something as complicated as a seven-headed Hydra. Harryhausen simply cocked an eyebrow, gave a wry smile, and replied, "Yeah, you unplug the phone and CONCENTRATE."

Phones were plugged into the walls those days.

And animators were titans.

Farewell, Mr. Harryhausen. You will be greatly missed.

R.I.P.
don't know how I missed this post but I lub it