EVERYTHING PREHISTORIC
The Final Installment of The Jurassic Journals
At the end of our long week of dinosaur-digging, Greg, Chuck, Brandon, Zack, and I said our fond farewells to everyone at the Waugh dig and returned to the Black Hills Institute in Rapid City, South Dakota. Having toiled for hours in the dirt and sun for every fragment of bone, the colossal skeletons in the museum took on a whole new meaning. I can only imagine what it must feel like to find something as large and awesome as a rex skull. 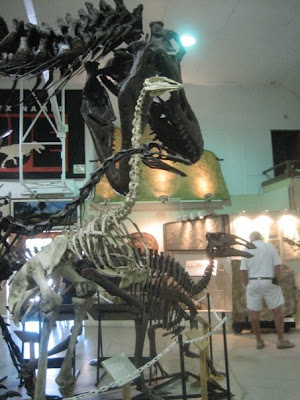 Pete Larson took us behind the scenes to the BHI's fossil workshop. We watched him clean-up Greg's Camarasaurus claw and he let us go through drawers and drawers of dino-bits including specimens of Camarasaurus, Brachiosaurus, Stegosaurus, Hypsilophodon, Allosaurus, Barosaurus, Triceratops, T. rex, and (my favorite) Apatosaurus. I love how the fossil cleaning stations (seen below) could totally double as animation desks; I'm getting ideas for my future home. 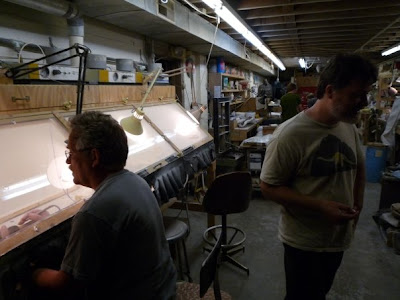 While in South Dakota, we did the obligatory Mt. Rushmore trip. To be honest, it was kind of a let-down after all the prehistoric hijinks. 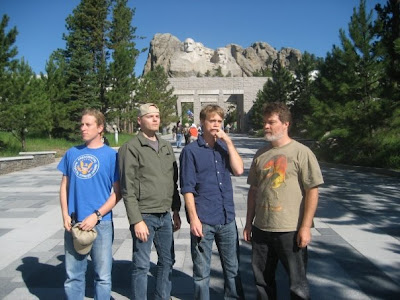 Our last stop more than made up for Rushmore's lameness. Matt Seney (remember the snake-handler from Journal Six?) used to work at this local attraction called Reptile Gardens. He wanted to give us a backstage tour of the joint, but due to a flash storm (more on that later) he was stuck back at the dig site in Hulett. Fortuitously, the waitress we had at lunch knew a guy who worked at the Gardens, so she hooked us up with a backstage tour anyway! 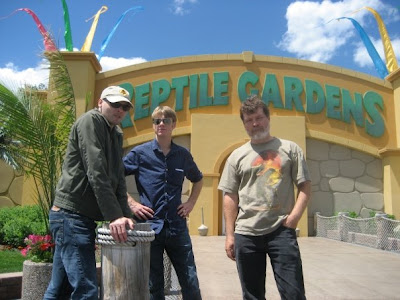 There was something poetic about ending our dinosaur trip with a visit to their descendents. This komodo dragon certainly bore a striking resemblance to his ancestors. He was pretty relaxed, but his head would perk up every time children came up to the glass. 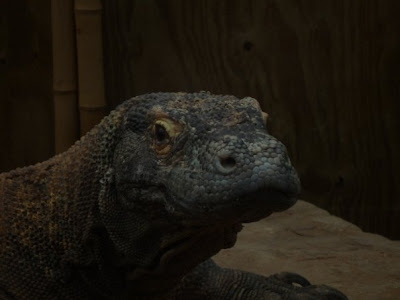 Our tour guide introduced us to a baby alligator who quickly became my new best friend. 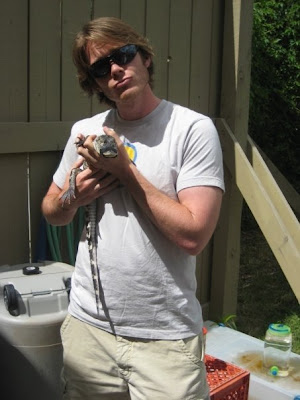 There was a croc handler who gave a presentation in a pen with an assortment of fifteen crocs and alligators. He'd drag em out of the water by their tail and wrestle them to the ground. Amazingly enough, he still had both arms and legs; I don't think he'd have had as much success in a pen with Deinosuchus (whose name means terrible croc). Just for reference, here's a picture Zack took of a modern man-eating croc's skull inside the jaws of the dino-eating Deinosuchus. 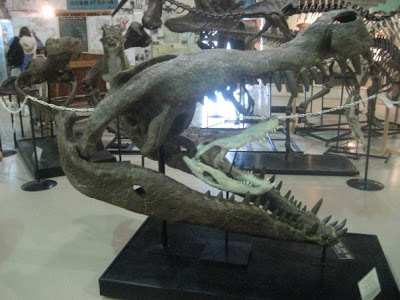 Meanwhile, back at the dig site...

Remember that storm I mentioned? Well, while I was cuddling up with my new gator pal, our friends at the Waugh ranch were being slammed by a massive hail storm. We had seen the storm front amassing earlier in the day, before we left camp. Since the only road out of camp was a two-mile dirt road, we said some hastey good-byes to all our friends so we could hit the road before the storm made it impassable. 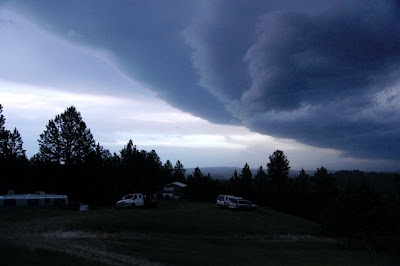 A mere two hours after we sped off, hail the size of softballs began pelting the camp, smashing nine of ten car windshields. 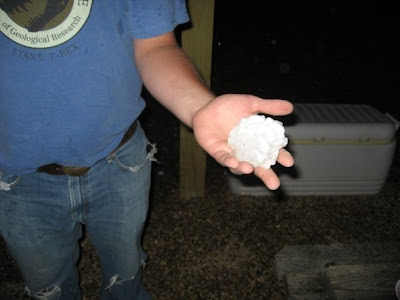 We heard of one family who also decided to hit the dirt road before the storm washed away. They packed up their tent, their digging gear, bone fragments and dog. But they forgot one thing as they zipped away from the camp in their RV: their eight year-old son! He was still at the camp site in the hail! Everything turned out alright; they went back for him and no real harm was done. But imagine being abandoned by your family and left in this (thanks to my buddy Amar for the great footage!):

Thus ended our first great dinosaur hunt. As you can see, it was an amazing time, and we all made some fantastic friends with dino-lovers from all over the world. For any of you,who are interested in going on a dinosaur dig yourself, I highly recommend contacting the fine folks at the Black Hills Institute and volunteering for next year's Waugh Dig. You don't need any experience (heck, I'd never been camping!), just a love for everything prehistoric. 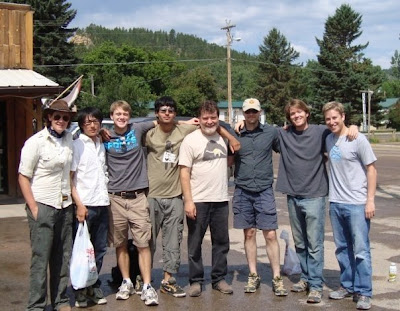 It sounds like the whole thing was quit an adventure. It is really cool that you got to live out a dream, at least for a time.

If you want a Griffin story with Dinosaurs I got one hot of the press with an appatosaurus and a triceratops. Email at mustarter@yahoo.com if you are down.

Thanks for the interest.

Not quite sure how I stumbled upon your blog but I have to say thank you for posting such kind words about BHI. Pete is my dad and that crazy dude running under the shelter away from the hail is my brother, Tim. I remember meeting your friend Greg and his brother-in-law back in 2003 (I think that was his first time up at the Waugh dig). Hope you make it back for another season.