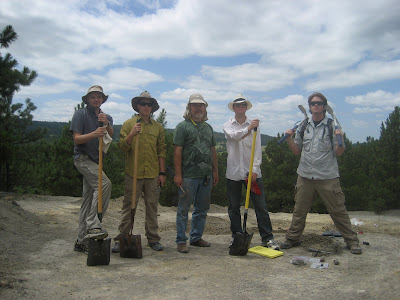 "Grant's like me...he's a digger."
The Waugh dig is a collection of quarries working their way into the Morrison formation, hunting the titans of the Jurassic Era. These quarries are labeled A-K, and carefully plotted on a map as each site is developed. Pictured above are the Pixar paleontologists (from left): Chuck Waite, Brandon Hyman, Greg Dykstra, Zack Keller, and me. We were assigned to F Quarry, where we were supervized by seventeen year-old veteran dino hunter Kyle Lindsey. Below, Kyle (left) helps Zack uncover a new find. 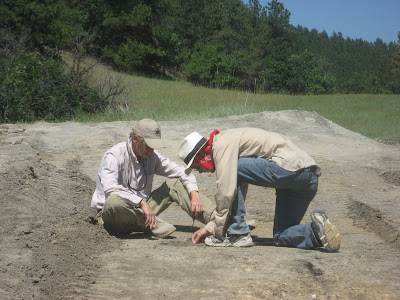 While Greg got straight to work, Kyle taught us rookies how to 1) know a fossil when we saw one, and 2) carefully excavate said fossil from the surrounding rock matrix using exactoblades, brushes, and paleo-bond (a sort of superglue used to repair fractured fossils). Below are (from left to right): BHI staffer Matt Seney, Greg Dykstra, Kyle Linsdey, Chuck Waite, BHI staffer Sam (I forget his last name), Oguchi Shota, and (on the ground in front), me and Brandon Hyman. 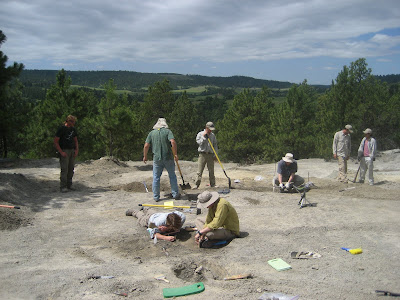 After hours of toil with no bones to show for our efforts, we began to come up with new F-names for our quarry (Fruitless-, Frustrating-, and just plain Fucked Quarry were among the favorites). 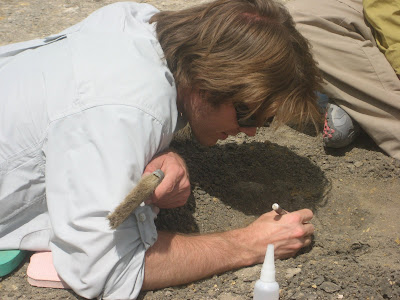 We were also lovingly christened as "Faileontologists" by the other diggers, particularly those in A Quarry, who were unearthing all the good stuff. I'm pretty sure the A stood for Astounding-, Awesome-, Amazing-, and Allosaur-Teeth-Everywhere Quarry. Here Pete Larson is uncovering another Admirable A-Quarry find. His daughter, Ella, doesn't seem as impressed as we are. 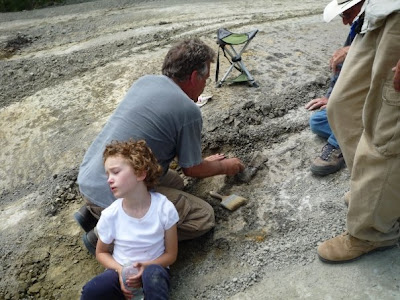 This gorgeous allosaurus tooth is an example of the fine specimens A Quarry would be uncovering on an hourly basis. 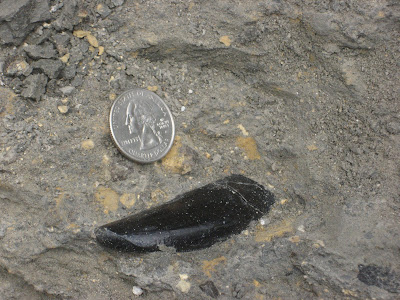 Meanwhile, over at F(ractured fossil) Quarry, we were brushing as carefully as possible around this brittle, oxidized fractured camarasaur bone. Note the bottle to the left; that's paleo-bond, which we kept pouring onto our constantly-breaking bones. On several occassions, Sam even told us not to use the adhesive, that it was worth more (at $10 a bottle) than the specimens we were laboring to recover. 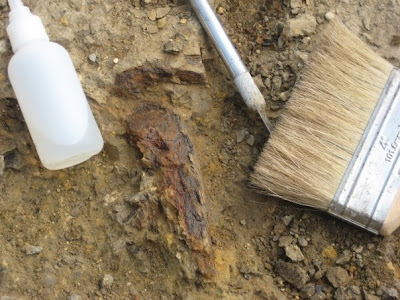 Here I am staring longingly at A Quarry as UK students Holly and Amar dig away. 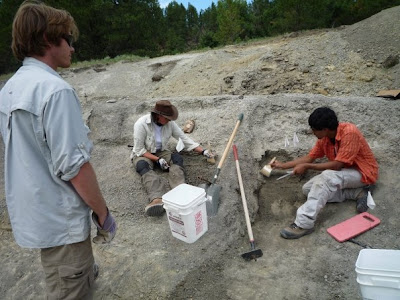 Greg mentioned that it was the first time at the Waugh dig that he hadn't been assigned to A Quarry, but he dug dutifully with the rest of us faileontologists and shared in our small victories, like Chuck's croc tooth. 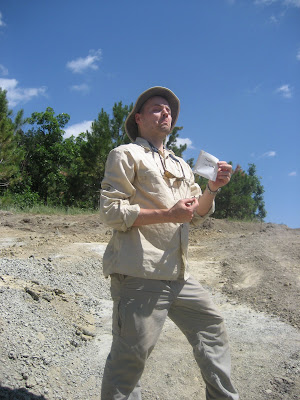 The croc tooth was our first flag-able find; diggers flag areas where complete bones are found so that they can be carefully mapped and excavated. Here we are, striking the Iwo Jima pose in honor of our first flag. 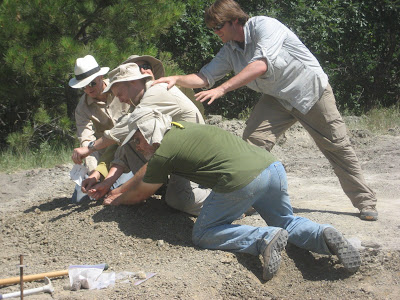 And, once again, A Quarry for contrast. 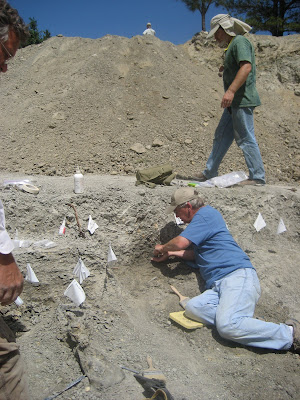 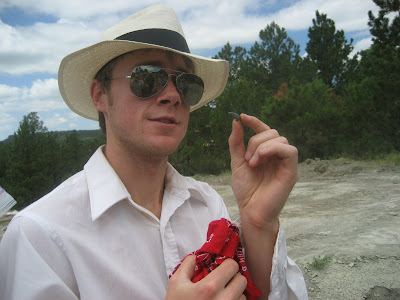 Zack and I immediately start digging where the hypsolophodontid claw was found. Twelve hours of digging later (I kid you not), after having found absolutely nothing else, we cut our losses, abandon the site, and return to our original dig positions. 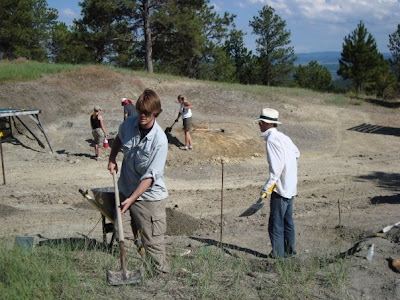 At the end of every day, though, we'd be all smiles as we trekked back to the camp site. Covered in dirt, sweat, blisters, and sunburns, but laughing about the endeavors of the day and our small successes. Here we are after the first day when we were too tired to hike and took the truck back. 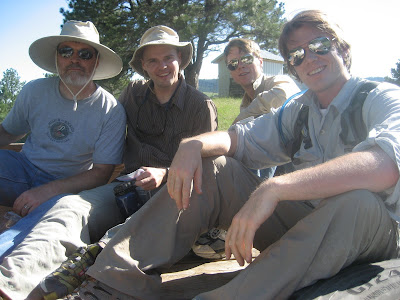 But don't worry, the Faileontologists had a chance to get even with the A-Diggers every night when we sat down for paleo-poker. Instead of chips, we used belemnites (squid fossils) that we found in the gravel around the mess hall. I came away each week with pockets full of belemnites, feeling quite vindicated. 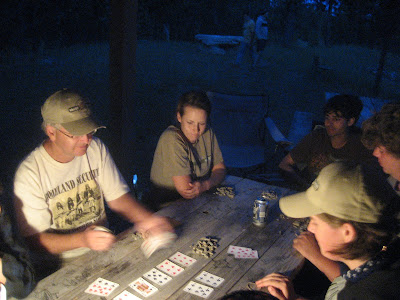 Next Journal: the faileontologists graduate to A Quarry. Will we find our fortune and glory or remain as empty-handed as before? Stay tuned to the Jurassic Journals to find out! 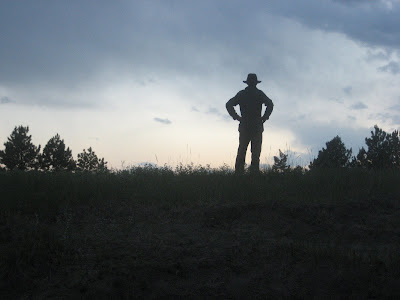 I know the feeling of being a faileontologist, since I'm a veteran malarkeyologist. I went on a dig and was assigned a completely empty square of an old gold rush hotel site. Everyone else was finding false teeth and belt buckles, and I just found authentic rocks.

That was awesome! thanks 4 sharing, really enjoyed reading about it :)