Tim Burton Sits Down with Ray Harryhausen
Over the weekend, I ran into this cool interview of Tim Burton with Ray Harryhausen. Burton's a real hero of mine, so it's funny to watch him geek-out over basically anything Harryhausen says. If you're interested in listening to the wisdom of one of the masters of the animated craft, follow the links below:
Part I: Inventing an Artform
Part II: The Pitiable Leviathon
Part III: Monster Music

Ray Harryhausen mentions that a major artistic influence on him was the work of Gustave Dore. This was a new name to me, so I thought I'd look him up. His work is fantastic! As a kid who grew up on flat-toned comics, dramatic lighting doesn't come very naturally to me. So to see this level of mastery is pretty inspiring! 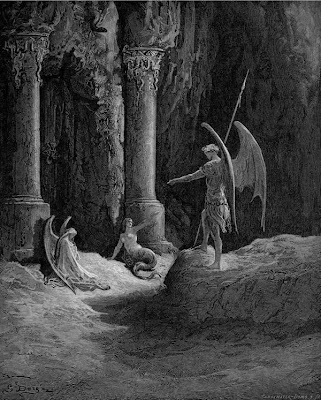 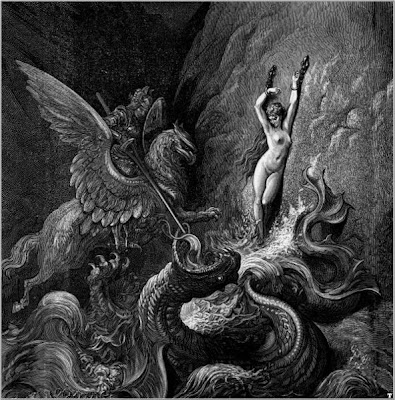 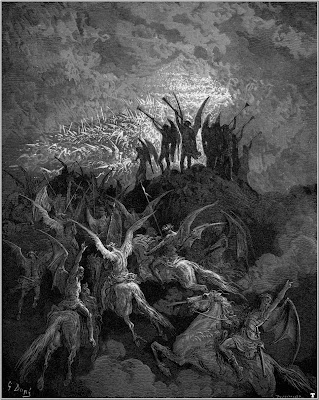 Dore's imagery is truly cinematic. It's unfortunate that he died in 1883, a mere five years after Eadweard Muybridge's experiments in real-time photo-capture, and just before the development of the first motion picture camera. Like Harryhausen says, if Dore had been alive during the age of film, I'm sure he would have been one of it's most successful auteurs.
Posted by Unknown at 9:12 AM

Gustav Dore was NEW to you?? I only mention him like in every other sentence when I talk about great artists.

Why won't Austin listen to me unless my name is Tim Burton...::sniff::

Dover has put out a few nice little books on Dore's Illustrations. I'd highly recommend "Dore's London". Great book with 180 Illustrations for about 12 bucks at a Borders.

He really knows how to show the mood of a setting, and captures everywhere from high-class gardens to the slums of London in the 19th century.

Vi-haha, sorry about that, pal. You can at least take solace in the fact that you have the same sensibilities as Ray Harryhausen.

Chris-thanks man, I'll have to check it out.

hey man thanks for posting that up, very entertaining! Great blog you got here, you're an extremely talented artist!

Really glad you posted about Dore. I'm a big fan of his as well. I also watched one of the Harryhausen - Burton interviews, these are fantastic. I have been watching the The 7th Voyage Of Sinbad with my 5 year old daughter and she loves the weird monsters, so do I for that matter!