Prehistoric Runway
Paleontologists in southwestern France have discovered fossil footprints of a landing pterosaur. This find offers a rare glimpse into the way these animals moved. The way I see it, now we have no reason not to animate pterosaurs. Wired magazine describes the researchers' conclusions:
"As it arrived, the dinosaur used its wings as brakes, then planted its dainty hind feet into the mud. This wasn’t enough to slow its momentum; it bounced momentarily back into the air before touching down again, this time dragging its feet. Once under control, it leaned forward, placed its wingtip forelimbs on the ground, and ambled away on all fours." 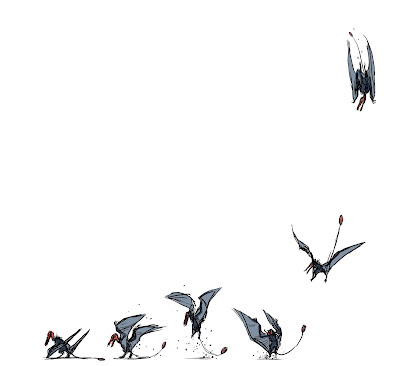 Here are the actual tracks and a dance-step-like breakdown of the landing sequence. These tracks come from a smaller pterosaur (probably no more than a meter long). What I'd like to know is how a big guy like this Hatzegopteryx took off in the first place. This guy had a 40 ft wingspan (that's larger than a Cessna), and is estimated to have weighed over 500 lbs. Oh, and he was discovered in Transylvania, so I'm pretty sure he was vampiric. 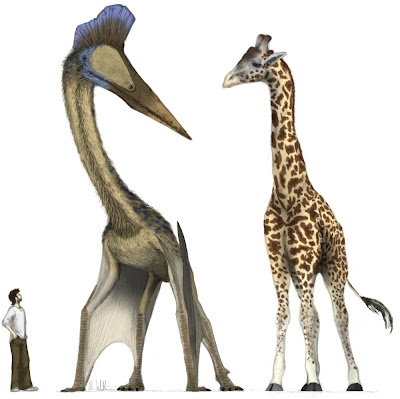 Very studied observations from a really great animator! I hope James Gurney sees your drawings. Its amazing something this big flew.

Thanks, Dave. I should state for the record that I didn't do the Hatzegopteryx/giraffe drawing.

DUDE. This is so awesome!

Wow! that is fascinating! I want to go on one of your Dino adventures : )

These are AMAZING! I love the single page animation happening. So fun!!! :D

Only just found you after you sent a few readers my way. Thanks for that!

Lovely stuff on here - while I do work on dinosaurs / pterosaurs, I'm a bit of an animation fan so it's great to see this stuff up here and some nice art.

How did the big ones take off? Like this: http://archosaurmusings.wordpress.com/2009/10/02/svp-art-and-congratulations-to-julia-molnar/

And #2, awesome though that little sketch is, that's a rhamphorhynchoid landing and the trakway is from a pterodactyloid. Sorry to be picky! But the two are quite different and indeed we don't have any confirmed tracks for rhamphorhynchoids.

Keep up the good work!

Thanks, Dave!
Pterodactyloid, got it. Always interested to learn more about our prehistoric pals.