CHADES CHALLENGE XXI: SWEATY ROBOTS
My entries for this week's Character Design (or Chades) Challenge, which was to draw perspiring automatons:

"You sure you should be in here, Lew?" 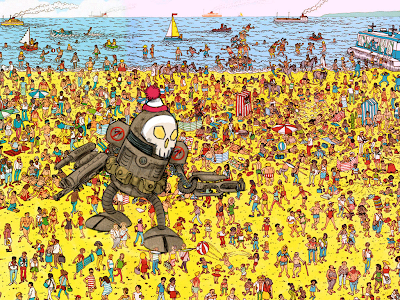 Help Waldroid find and destroy Waldo once and for all!
I thought it'd be fun to see one of Ashley Wood's creations hunt down Waldo, I know I used to sweat as a kid whenever I was hunched over one of those damned puzzles. If you designed any sweaty robots, let me know so I can post your design. Next week's drawing challenge is an entirely new game:
CHOOSE YOUR OWN (DRAWING) ADVENTURE
The challenge is based on the votes of this week's polls: "Once there was a...", "Who...", and "So they could...". This week, there was a tie between: "Once there was a baby-stealing goblin who chased rabbits the size of asteroids so they could shoot an award-winning documentary," and, "Once there was a baby-stealing goblin who sailed the seven seas so they could shoot an award-winning documentary." So feel free to illustrate either (or both) stories.

Since this is a tall order to fill, I'll give you guys a couple weeks to work on it. Post your documentary-shooting, rabbit-chasing/sea-sailing, baby-stealing goblins by Friday, August 28. Sketch greatly!

I also thought it'd be fun to include a little interview with each of the drawing challenges, to offer insight into each artist's work method. The first conversation is with an old pal of mine from school: Laika storyman, fellow CalArts alumnus, and all-around highflyer, Vi-Dieu Nguyen.
Interview with a Genius I: Vi-Dieu Nguyen 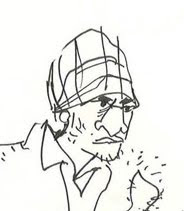 me: hey-o
Vi-Dieu: yo
me: mind if I interview you?
Vi-Dieu: do it
me: I'm going to post an interview on each Chades Challenge
Vi-Dieu: ok
me: starting with you mon frere
Vi-Dieu: great
I'll try to be controversial
me: awesome
How do you balance cartooniness and realism in your work?
Vi-Dieu: I try get a certain "feeling" with my drawings. so if it feels too much like hanna barbera then I'll try to add more classical influences
me: nice
What is your favorite thing about drawing?
Vi-Dieu: getting lost in it. flo
ever heard of that term? flo?
me: nope
Vi-Dieu: it's when you get in that groove
me: that's what I figured
Vi-Dieu: like being addicted to the act of creating
me: Do you think about style or how other artists might approach this subject as you design?
Vi-Dieu: both. other artists do certain things so well, but again, I have to be "me," so ... actually, if I think of other artists, I like to use the lesser known ones to reintroduce the old to modern times
or 'hidden artists'
me: I'll let you keep your resources a secret
Vi-Dieu: haha
no, you don't have to. I advertise them all the time
me: How much does composition play into a gag? Do you rework drawings for better clarity or workout the thumbnail first?
Vi-Dieu: sometimes. sometimes the first drawing comes out nicest. but if I want to convey something clearly, then yeah, I'll rework it. but sometimes it's just about having fun
me: How do you decide when a drawing is finished?
Vi-Dieu: when I can't figure out what else to do with it, it's finished. or if I get tired of it
me: haha sounds like my approach
Vi-Dieu: yep
me: okay, last question
What makes a good drawing?
Vi-Dieu: I want to say something really generic, but for me, a drawing can be wonky and stiff and still be a good drawing...I love prints...so a drawing that has something interesting about it. if a drawing is interesting to me, I think it's a good drawing..like if it fits with things I find interesting at the time
me: I'll make sure to do more drawings of cosmonauts.
Vi-Dieu: haha
me: Thanks man, good answers!
Vi-Dieu: well, for example I'm getting into audobon. if you look him up, you'll "ah, of course Vi would like that"
your welcome
that was fun
I will return the favor someday
me: I'll make sure to be crass.
Posted by Unknown at 8:39 AM

Amazing drawings man. Cool interview too. Vi is a genius.

Also, this is a GREAT sauna drawing. You captured it.

Particularly the little coal bin...nice detail that makes it that much more 'real.'

I have a fishing robot posted; I always sweat a lot while I fish. Though the inspiration had nothing to do with ChaDes. It's a choose your own adventure whether it is appropriate to post.

Thank you for the invite.